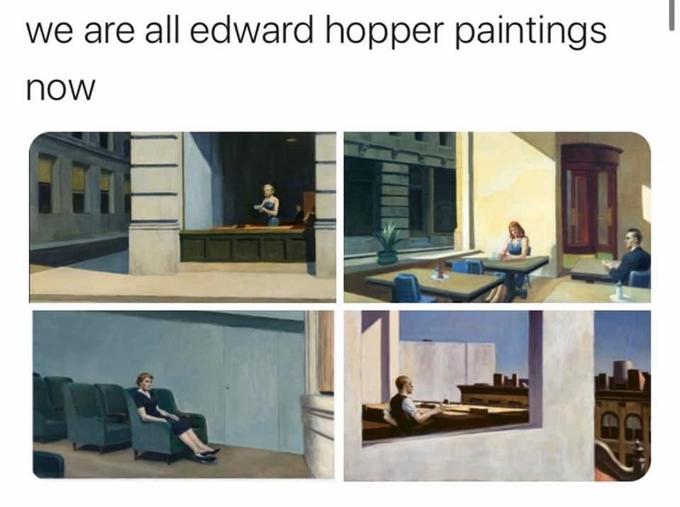 For those of you who know me well, you know I LIVE for a good meme. I will make a meme for any and all occasions. In fact, my very first mini-unit when I returned back from maternity leave this year was called, “What Do You Meme?” I had students look at reproductions of famous works of art and create hilarious captions, or memes, that showed they understood the context of the art enough to make clever commentary about the piece. Kids are so. darn. smart. and interesting. and hilarious. and good at memes. cause KIDS (amiright?).

Here are a few of my favorites in case you missed the Instagram post earlier this year (@StudioMaury):

See, I just got WAY off topic getting overly excited about memes that I strayed from the true intention of this week’s blog post–LONELINESS! ISOLATION! DEEP FEELINGS OF SOLITUDE! In a nutshell: EDWARD HOPPER.

Before ye olde quarantine, my family and I had the pleasure of stopping off in Richmond, our favorite halfway point between DC and North Carolina, where all the grandparents live. Hi grandparents reading this from afar! We miss you! We, like, REALLY, REALLY miss you! Help! Just kidding. We’re fine. Everyone is JUST FINE. 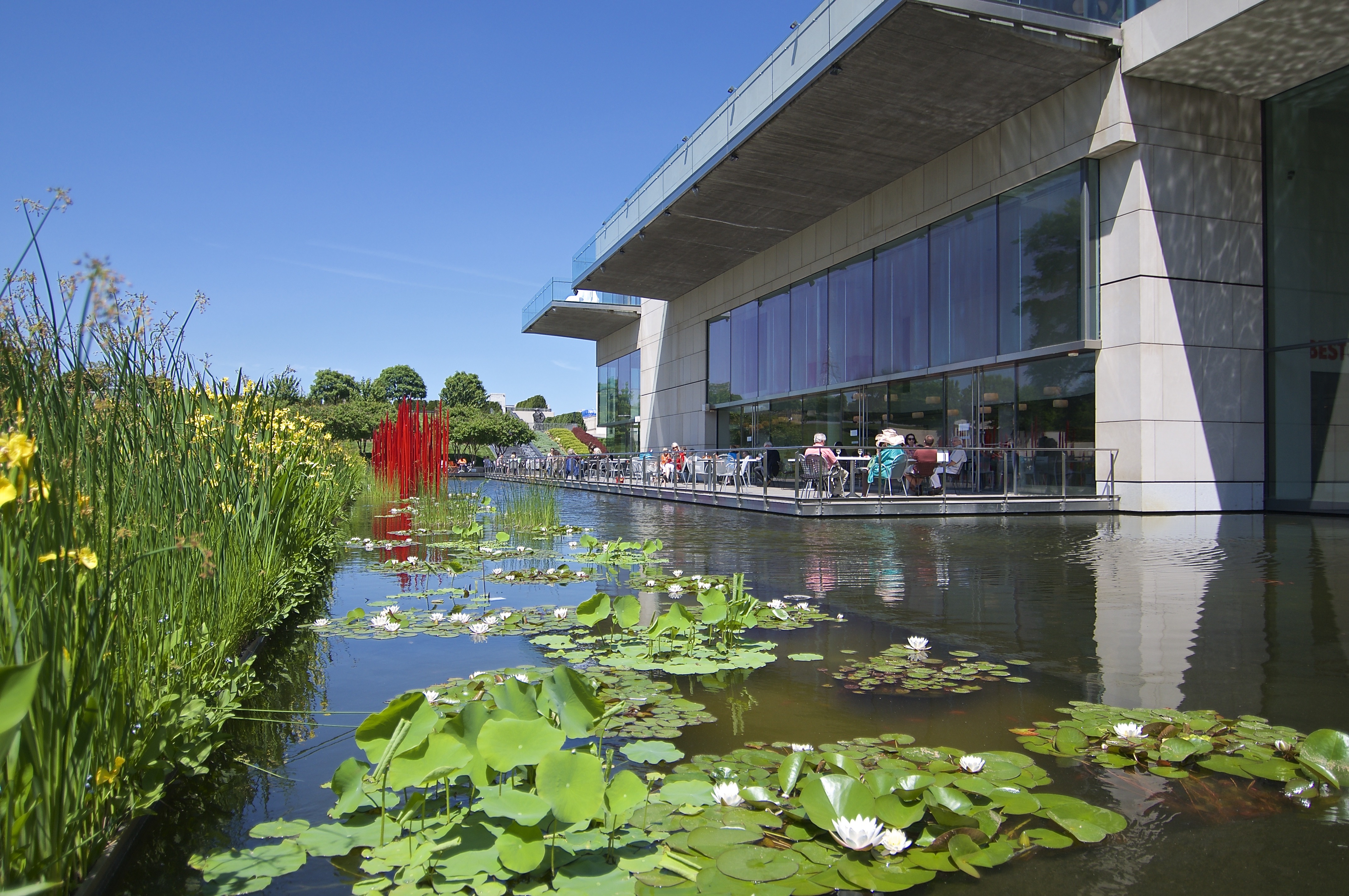 While in Richmond, we stopped at the Richmond Museum of Fine Art, which is more than fine, it’s awesome, and there is currently a very lonely, very wonderful exhibition about loneliness and longing (Ironically? Not ironically?), called Edward Hopper and the American Hotel. Edward Hopper, even after his death, has been able to uphold his spotless reputation as beloved, which seems nearly impossible to do these days. Everyone is always trying to dig up dirt on people, tarnish our heroes, and uncover unsavory truths, but this guy, Edward Hopper, ultimate feel giver, has somehow come out unscathed. Maybe good guys do exist! Sadly, not many artists can say the same. Since we are focusing on the positive these days, you’ll be happy to know that we’re all still allowed to collectively love Hopper.  Praise be.

Hopper may have stayed out of trouble due to the fact that he was a man of few words. Small talk was not his thing. Without talking small, you can’t say dumb, inappropriate, offensive things, at least publicly. The few times he did talk to journalists, he said profound things like,

If you could say it in words there would be no reason to paint.

His paintings, as the kids these days would say, are a MOOD!

I love this description of Hopper’s painting style by Jessica Murphy of the MET:

Clearly outlined forms in strongly defined lighting, a cropped composition with an almost “cinematic” viewpoint, and a mood of eerie stillness.

Hopper focused a lot on the idea of figures (often his wife) looking outward, longing for what lies beyond. So far, every image I’ve shared with you of Hopper’s work is an interior shot, with a figure’s gaze directed upon the unknown. His figures described as,

Lost in their own weariness and private concerns, their disconnection perhaps echoing the wartime anxiety felt by the nation as a whole. 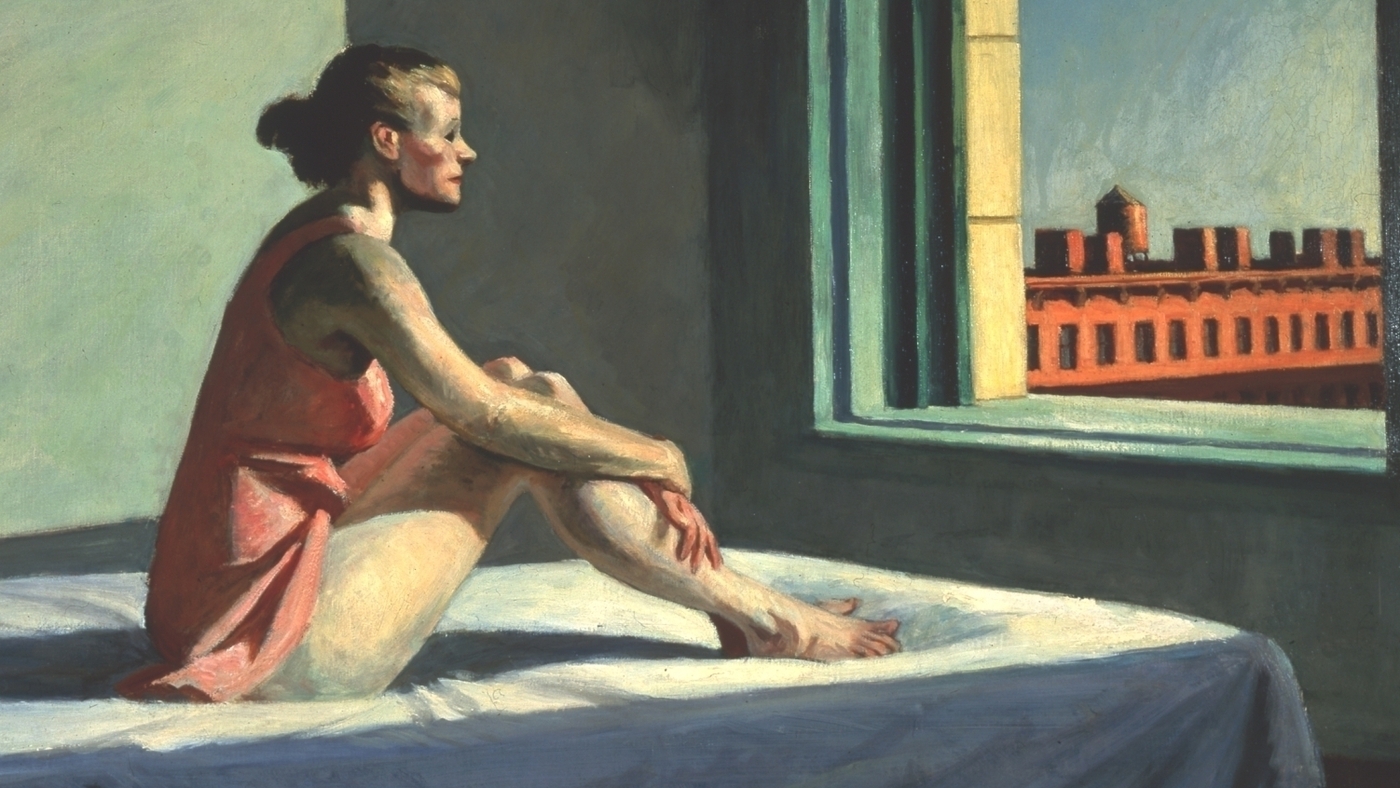 Again I’ll say, we are all Edward Hopper paintings now.

Again he’ll say, If you could say it in words there would be no reason to paint.

How many of you have spent countless hours like a person trapped inside one of Hopper’s moody paintings lately, daydreaming of the world beyond your window, lost in the weariness or your private concerns, disconnected, and echoing the exact same feelings of your neighbors and nation as a whole?

You are not alone.

Sometimes, Hopper takes a different vantage point and casts his canvas upon the structure from the outside, forcing our curiosity inward. What’s inside? Who lives there? Where is everyone? Where am I? 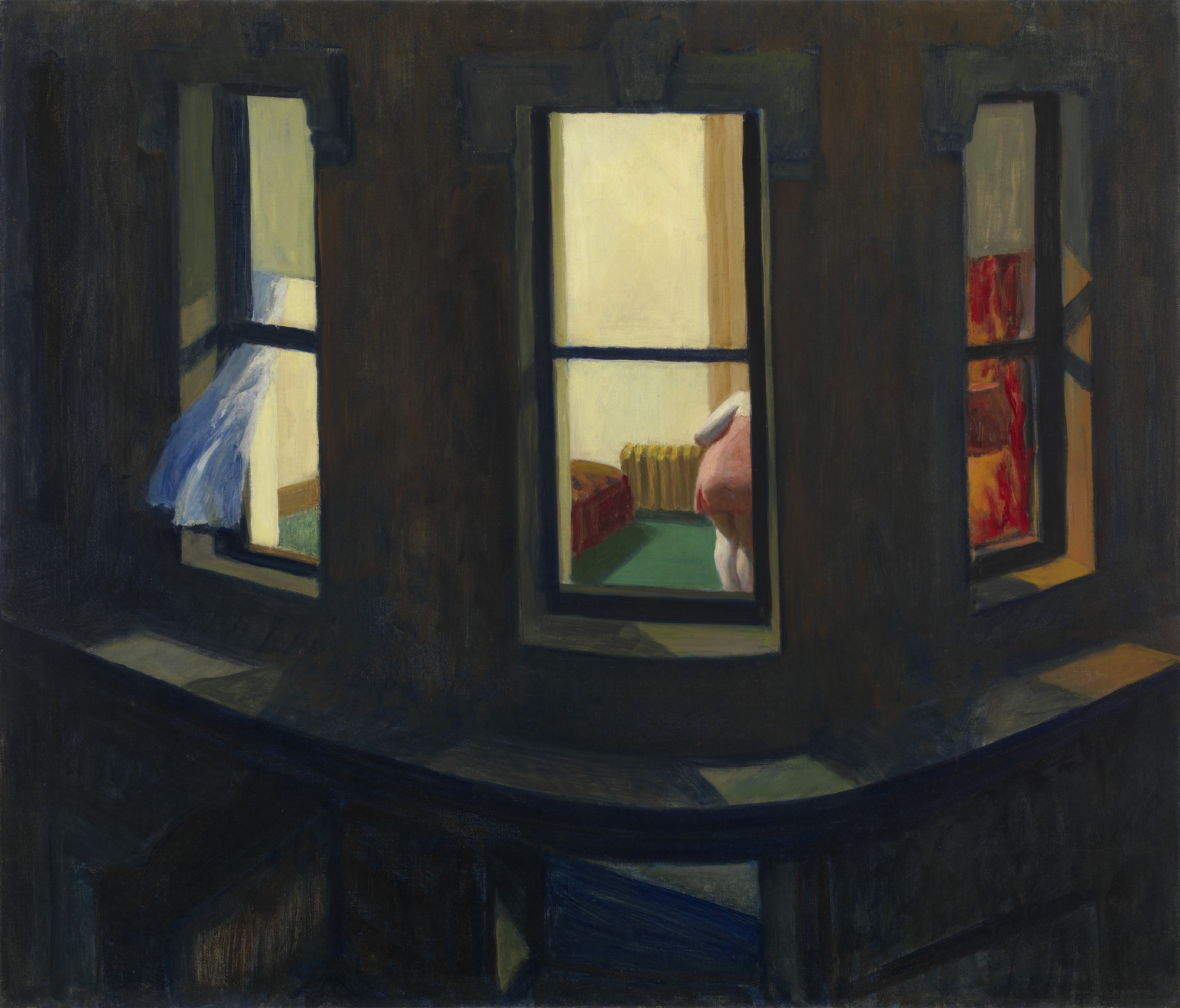 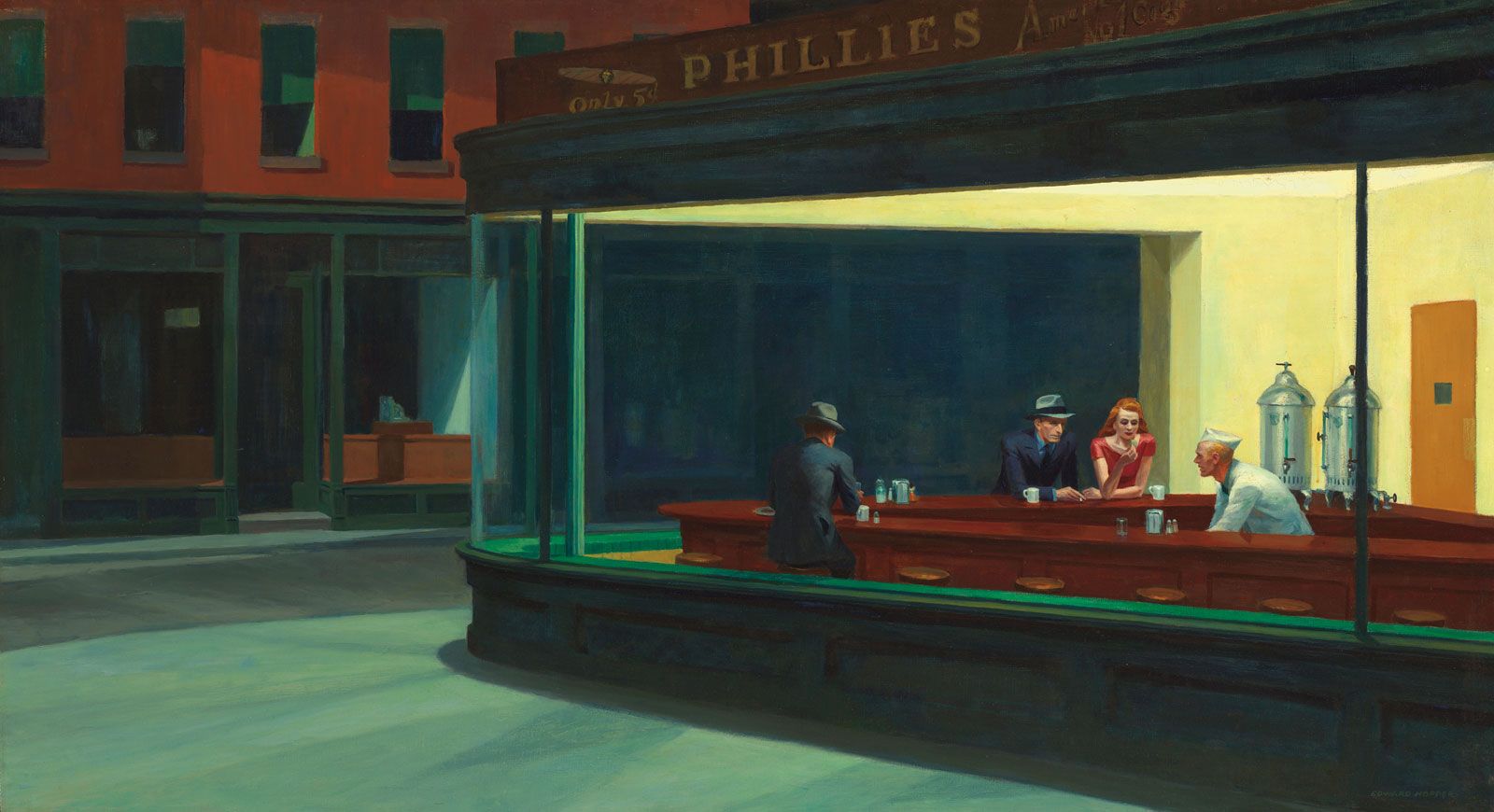 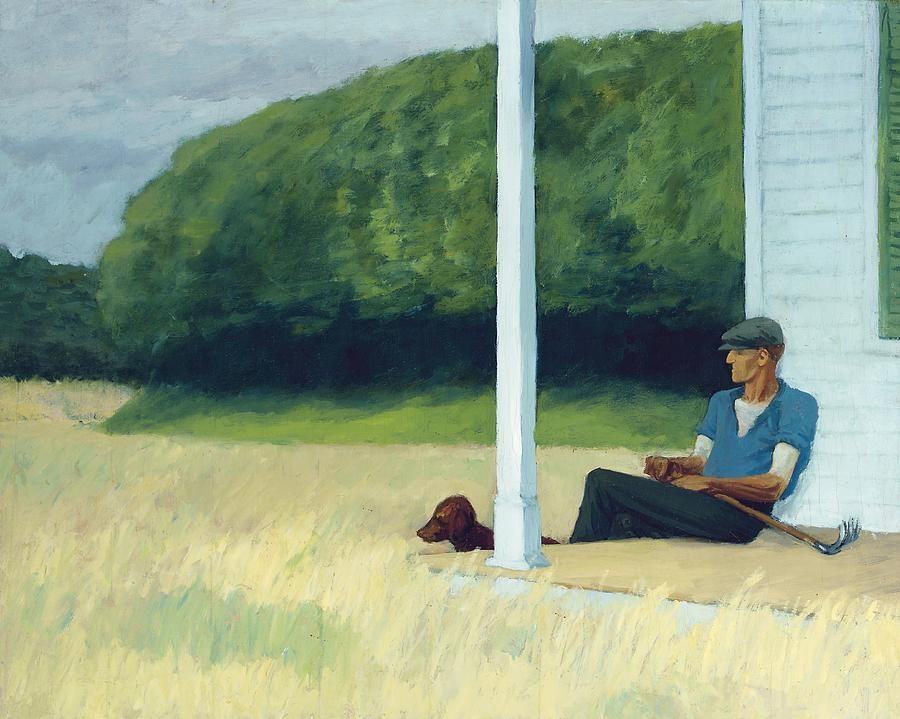 I want you to situate yourself across the street from your home. I want you to observe the place that keeps you safe right now. I want you to pay tribute to the structure that holds the people you love close, while still offering a window to the world outside. 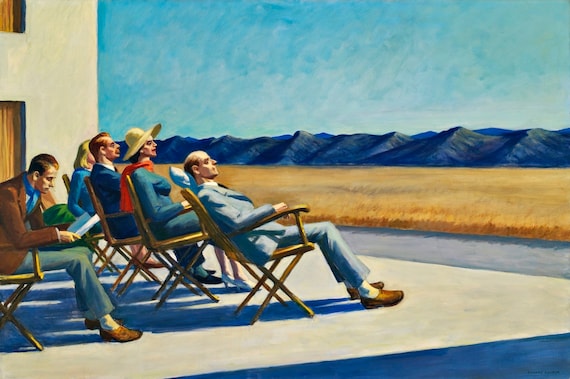 I want you to try your hand at realistic painting or drawing this week. I usually don’t encourage elementary school aged children to focus on realism because there’s a lot of time for reality later on in life, but due to the introspective nature of the times, the REALNESS of the times, I think it would be a nice way to meditate on the specific things that make your house such a sturdy ship among the rough seas. 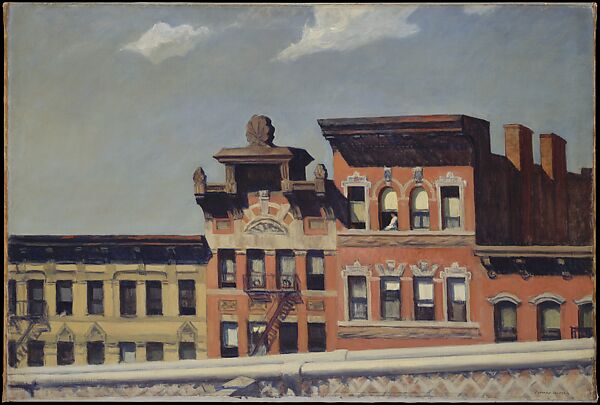 Try focusing on the lines used to create your home. I use a ruler to help me measure the distances between things like windows. Take note of the imperfections. Chipping paint, weeds, a broken down bicycle. All of these things are records of the lives that live inside.

If you are more comfortable taking on the view of the world from inside your home, you are welcome to try that angle too! Get some perspective. Show us where you are in the painting by including aspects of the interior space and the view outside the window, just like Hopper does.

If you have a convenient model nearby, like a sibling, pet, or parent teleworking, include them as a figure within your artwork.

Think of this work of art as a gift to your house. A portrait of your house. After all, your home is probably taking on human features right about now and becoming a true member of your family. Make it with care. Do not rush it. Come back to it several times. Make multiple drafts until you capture the right mood.

There is a sort of elation about sunlight on the upper part of a house.

Find that elation, that great happiness or exhilaration, and capture it in a way that only art can!

Send me your work! I’d love to see the world from your point of view right now!

And for anyone who has ever dreamed of spending the night in a museum, check out this amazing article about sleeping in one of Hopper’s paintings at the Richmond Museum of Fine Art!

Look out for this exhibition coming to DC as soon as museums reopen!

5 thoughts on “We Are All Edward Hopper Paintings Now…”